Writing isn’t the first thing that comes to mind when we think about the skills needed for a career in law enforcement. Yet, police officers are expected to possess them, as they need to document their activities on a continuous basis.

In fact, some officers may have to write up to four lengthy reports per shift. That’s hours of work. Since those reports are used to enforce laws, the ability to write effectively and coherently is essential.

In this post, we’re going to talk about the connection between professional writing skills and a successful and fulfilling career in law enforcement.

Television and media adaptation led us to believe that police work is all about chasing down criminals, high-speed vehicle pursuits, and dangerous shootouts.

The daily routine of a police officer – and other law enforcement officials – is quite different. Writing is a major part of that routine. A police officer needs to generate a report for every call of service to write down the details of events and investigations.

The reports are extremely important and used as evidence in court, investigating crimes, and even tracking criminal trends. A poorly written report thus can negatively affect a court case by failing to provide clear information about wrongdoing.

Ultimately, writing skills have a major impact on a law enforcement officer’s career. Police officers are well-aware of their importance.

In fact, a survey of Ohio police chiefs revealed that the vast majority perceived them important “to the success of a police officer” and that they “impact an organization’s ability to fulfill its mission.”

Over 90 percent of the participants also agreed that writing skills:

● Affected the prosecution of cases
● Impacted supervisor’s perception of them as a law enforcement officer
● Influenced the decision to appoint officers for special assignments
● Impacted their promotion within their department.

These results show that writing affects both an officer’s career and their ability to do their job.

When asked about specific qualities of writing (grammar, clarity, etc.), the participants also saw them as “extremely” or ”very” important. 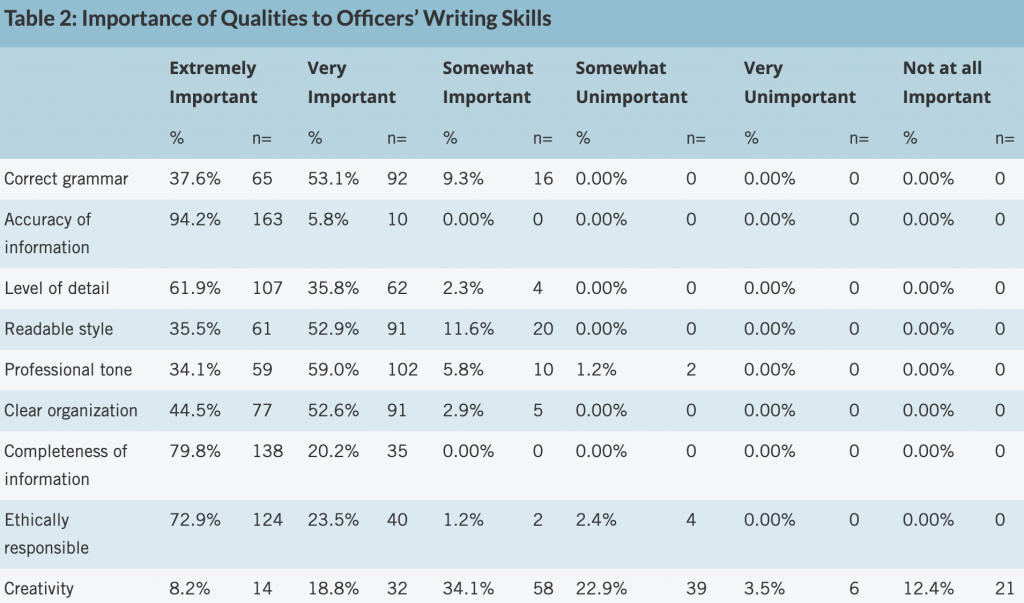 So, the police officers say their writing must be accurate, clear, grammatically correct, detail-oriented, complete, and have a professional tone. Also, about 40 percent of participants saw “creativity” as a relevant quality to write effectively.

So, what types of documents do law enforcement officers write? During the course of their career, they are expected to work on:

A police officer needs to draft a report describing every response to a suspected criminal activity. The report contains details such as the incident summary, involved individuals, facts, etc., and serves as a starting point in criminal investigations.

As indicated by the Ohio survey, poor writing skills can negatively impact the perception of the supervisor.

Also, clear communication between police officers helps them do their job more effectively and efficiently.

Next, let’s see how to improve skills to communicate as a law enforcement officer.

How to Build Writing Skills for Law Enforcement Officers

Making reports or other written communications sound fancy by using complex words and sentences is a bad idea. They introduce ambiguity and waste the time of people who will read the report later.

Read this excerpt from a public outreach program supported by the police department in Parker, CO. It’s a perfect representation of a concise, clear, and organized text. 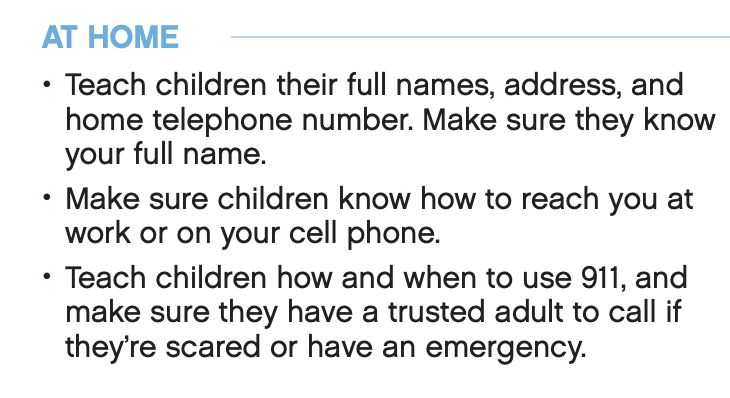 To write clearly and organize texts:

● Use bullet points when listing tips or instructions. They make texts easier to scan and read
● Avoid informal language. Everyday, simple language is best for outreach because the public prefers it
● Start with a verb to give advice. Verbs eliminate repeating words in bullet points
● Use “you” and “your” in public outreach documents. It’s important to create a sense of a conversation with them
● Use headings and subheadings. They help to break up long texts, which applies to all kinds of public outreach writing.

Remember, the job of a law enforcement officer is to inform, not to impress.

Pro tip: Avoid “text speak” (e.g., “your” or “u” instead of “you are” and “you,” respectively) in all kinds of writing. Although it’s good for making writing shorter and more informal, it also makes it sound like an advertiser wrote it.

The “5-W & 1-H” formula is a common method used by law enforcement officers to achieve the most precise wording.
The abbreviation stands for Who, What, Where, When, Why, and How. By addressing these questions, an officer can address all details necessary for effective reporting:

Version I – a poor example

“Victim states he was robbed at the Webster Square shopping center parking lot on 12th Street. The suspects fled down Washington Street toward Beaver Brook park.”

“Stephen Rowe stated that on 11/08/19 at approximately 8:45 pm, he was leaving Webster Square shopping center on 12th Street. Two males approached him in the parking lot with a gun and demanded to give them all the money he had. Stephen gave the men his wallet containing a credit card, after which the suspects fled toward beaver Brook park. Victim says the suspects were about 20-25 years of age, had a buzz cut, and wore black hoodies and blue jeans.”

The second version had much more details presented in an organized manner. This helps to organize the report and provide as many details as possible for investigation.

Pro tip: Andrew Rowe, a writing expert from TopEssayWriting: “Use between one and three commas per sentence. The second example follows this tip to avoid unnecessary complicated sentences and occasional punctuation errors.”

3. Use Chronological Order for Report Writing

Chronological order organizes events in a report according to the involvement of a law enforcement officer. This technique helps the reader understand the incident in order, as seen from the officer’s perspective.

“09/07/19 3:10 pm I arrived at the scene, located at 73 Shrewsbury Street. I interviewed the victim, Ms. Morrison, at 3:15 pm. Ms. Morrison stated that she left her car at the parking lot besides a piercing salon at about 2:30 pm. She said when she returned from the grocery store at about 2:45 pm, she found her car was missing.”

As you can see, each sentence contains a time to help the readers understand the timeline of the event.

Pro tip: begin every sentence with a noun (person, palace, or thing) as in the examples. It’s a normal structure in English that keeps sentences easy to understand.

4. Use an App to Organize Notes

Any law enforcement officer or civil investigator knows how important note taking is at the crime scene. This practice, however, is outdated and inefficient. The notes are usually taken on paper and then later need to be scanned and re-submitted to reports and other documents.

Using the forensic notes app is a more efficient practice. It has ready-made documents for reports where an officer can make notes and add media like photos, videos, geolocation, weather, contacts, and signatures. 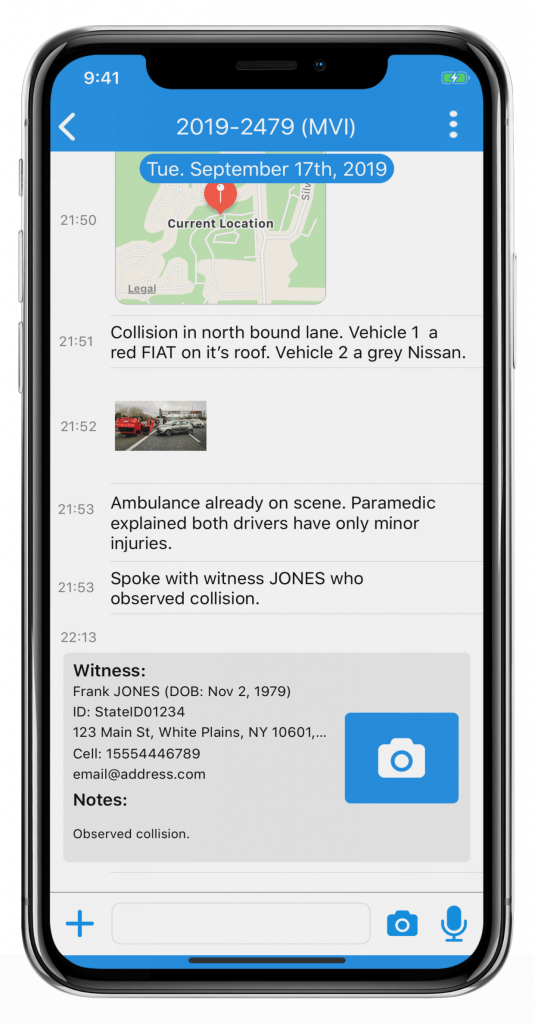 A major advantage of using an app like Forensic Notes, is that it is  purpose built for law enforcement.

Unlike many apps that simply save your notes, it uses a combination of timestamping and hashing.

Basically it means you can easily verify that notes were taken contemporaneously and not altered after the fact – which can be very difficult using popular consumer notetaking apps.

And which may be essential when it comes to court admissibility.

And plus, if you don’t like typing on your mobile device, there’s a voice recording feature, too, so you can do interviews and transcribe them later.

A law enforcement officer with strong writing skills can create quality reports and effectively communicate with colleagues and community members.

Writing will continue to play a vital role in law enforcement, so anyone working or planning to work in the area is advised to hone their writing skills.

Nicole Garrison works as a writing consultant for TrustMyPaper and bestessayseducation.com

For the past ten years, she has been advising on writing planning content strategies for small businesses and non-profit organizations.

Nicole often hosts writing workshops and webinars to share their knowledge of writing for the web.