Termination for Just Cause

Do you have an employee that is causing ongoing frustration due to their workplace behavior and performance?

Do you believe you are justified in firing this employee without providing a severance package, but fear that this will result in a costly lawsuit?

Luckily, Employment Lawyer Stuart Rudner has written the following article for you on Just Cause Termination.

Read the following informative article to learn exactly what is Just Cause for Termination from a top influential legal expert.

Stuart’s law firm was named as one of the top 3 employment law firms in the country.

Go to Stuart Rudner’s Article below

Employment law: misconduct of an employee, or some other event relevant to the employee, which justifies the immediate termination of the employment contract.
Source: Legal Definition of Just Cause provided by Duhaime’s Law Dictionary

Document performance concerns, misconduct, disciplinary actions, requests for accommodation, and anything else that may become contentious.

Otherwise, the lack of documentation will almost inevitably weaken your case if your actions are challenged.

One obvious area where this is relevant is discipline and dismissal.

It is a common occurrence for members of my firm to receive a call from a corporate client in which the client expresses their frustration with the ongoing performance or behavioral issues of a particular employee and proclaims that they have had enough and want to dismiss him or her.

They then broach the issue of whether they can do so for cause, at which point we ask them to send us the employee’s file.

In the vast majority of cases, what we receive is a file that does not contain a single negative comment.

It will contain average performance reviews, and no indication of any concern.

As we must then explain to our client, the lack of evidence of any ongoing concerns, and the fact that the employee was apparently never advised of any concerns, or of the consequences of failing to remedy the situation, means that a dismissal for cause is extremely unlikely to withstand scrutiny.

By way of background, in Canada there are two forms of dismissals:

Generally speaking, employers have the right to terminate an employee’s employment at any time without cause, as long as they provide the employee with reasonable notice of the termination, or reasonable pay in lieu thereof.

Often the biggest legal issue surrounding these dismissals is the adequacy of the notice offered to an employee.

Share this InfoGraphic on your site or blog, but kindly provide a link to this article.

Employment standards legislation sets out the absolute minimum that can be provided.

If the contract of employment contains a properly drafted termination clause, then that will establish the employer’s obligation, which can be as little as the legislated minimums.

In most cases, there is no such contractual provision, and the employee will be entitled to “reasonable notice”.

Contrary to popular opinion, this is not necessarily one month per year of service.

Our courts have been clear in stating that there are no convenient formulae or calculations, and that every case is to be assessed on its own particular circumstances.

The most common factors are often known as the “Bardal Factors, after the Bardal v. Globe & Mail, decision, which are age, length of service, nature of the dismissed employee’s position, and availability of similar employment.

Of course, this list is not exhaustive, and many other factors (such as inducement), can be considered.

“Reasonable notice” can be extensive. The unwritten rule is that it will not exceed 24 months, though the trend is to see increasing numbers.

In many cases, it will be close to a month per year, but it can be significantly more.

If you’ve been terminated without cause, you may be dealing with a wrongful termination. In this case, you will want to seek an experienced employment lawyer.

When meeting with an employment lawyer, you will want to provide several documents such as:

* Not part of original article by Stuart Rudner

Termination for Just Cause

Termination for just cause, on the other hand, means that an employee is not entitled to any notice or compensation for dismissal whatsoever.

Obviously, the ability to demonstrate just cause can be critical.

Furthermore, if an employer alleges just cause and then loses a wrongful dismissal suit, they will be liable for all pay in lieu of notice, possibly other damages if a court finds that they acted in bad faith, their own legal fees, and a portion of the employee’s.

This can be a massive liability.

Without documentation, dismissal for cause will be extremely difficult to support.

I am the author of You’re Fired! Just Cause for Dismissal in Canada, which discusses the law regarding when individuals can be dismissed for cause.

In the course of writing the book and updating it twice every year, I review all just cause decisions.

Courts are very protective of employees, whether in the context of dismissal, accommodation, or otherwise.

Given the harshness of a for cause dismissal, it is often referred to as “the capital punishment of employment law”.

It is absolutely possible to dismiss an employee for cause, but the threshold is high, and evidence will be crucial.

For that reason, employers need to be sure that they have evidence to support any allegations or defend their conduct.

Otherwise, many courts and arbitrators will “default” in favour of the employee.

Another area of employment law where documentation is important is human rights.

We have seen a tremendous growth in the protections afforded by Human Rights legislation and the need for employers to accommodate various employee conditions and obligations, including childcare, disability, and religious observance.

As we always advise clients, you should never dismiss a request for accommodation out of hand.

Rather, all requests should be documented, as should the assessment of the request and the possibility of providing accommodation.

Simply advising that accommodation is “not possible”, without any documentation of a legitimate assessment, will not be enough.

In recent years, we have also seen increased emphasis on workplace harassment, and the obligation of employers to address any such misconduct.

Legislation that will soon be in place in Ontario requiring that specific issues be addressed in written policies, including a clear process for investigating allegations of harassment.

It is critical that employers document all such allegations, as well as the steps that are taken to investigate them, the conclusions reached, and the actions taken as a result, including any disciplinary or remedial measures.

Our firm has also seen several clients taken to the Ministry of Labour based upon allegations of unpaid overtime.

In some cases, the employee had handwritten notes of hours worked, and the employer had nothing.

Obviously, they were at a tremendous disadvantage.

The bottom line is that whether you need to justify discipline or dismissal, investigate harassment, or respond to allegations of failure to accommodate, documentation is critical.

While you may be able to call a witness, oral evidence is less reliable and less compelling than contemporaneous documentation.

Of course, it is also important to utilize a tamper-proof, secure system.

I have seen individuals allege that disciplinary and other records were fraudulent, or backdated, or otherwise unreliable.

It will be important for any party producing documentary evidence to be able to demonstrate that it is reliable.

We work with both employers and employees.

Many of our clients are based in the United States or Europe, where the employment laws are quite different.

In the course of explaining Canadian Employment Law, we stress the need for documentation, and the value that an employee’s “file” can have when issues arise.

Unfortunately, both sides tend to overlook the fact that the employment relationship is based upon a legal contract, and that while everything might be good in the “honeymoon phase”, disputes can arise and it is very difficult to pursue a claim, or defend against one, without any documentation.

Stuart has been listed in Best Lawyers in Canada (Employment Law) and named a Top Legal Social Media Influencer (follow him on Twitter @CanadianHRLaw). His firm was named one of the Top 3 Employment Law Firms in the country.

Stuart is the author of a leading text on Summary Dismissal as well as chapters in four other books.

For more information about the firm, see RudnerLaw.ca

A Just Cause Termination letter should be carefully prepared and vetted by legal counsel and Human Resources. It should clearly outline any severance or benefits that will be paid out to the employee being terminated.

Termination for Just Cause may be valid based on the following examples:

But is Termination for Cause as straightforward as you would like?

This is likely not the case as the following example of employee theft could result in a wrongful dismissal case against your organization if not handled appropriately or without proper documentation. 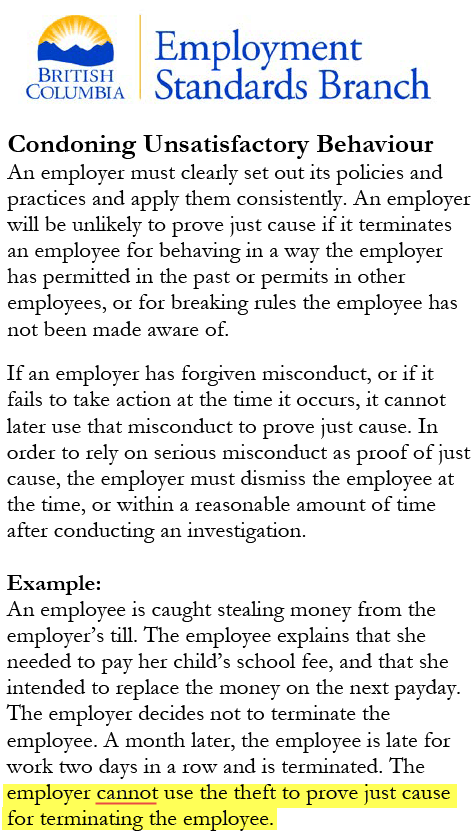 As you can see from the above example, the laws in your region may not be clear on when you can fire a employee for cause.

It is highly recommended that you always contact an experienced employment lawyer prior to termination of an employee.

1. Last step of employment where a worker is let go.
2. Customer cancellation of remaining work of a contract.

Source: Legal Definition of Termination provided by The Law Dictionary

An employer’s decision to terminate a contract of employment.
Source: Legal Definition of Dismissal provided by Duhaime’s Law Dictionary

The reality is that termination and dismissal are often used interchangeably – but there is one key difference:

Dismissal (referred to informally as firing or sacking) is the termination of employment by an employer against the will of the employee.

Termination could be an action taken by either the employer or employee in ending a contract.

A Quora post provides further information on the difference: